22nd March: The day we continue the antifascist struggle! 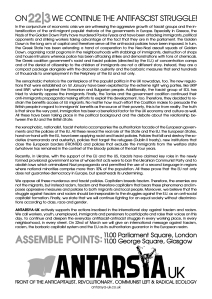 Happening now: Solidarity with the struggle of the workers who occupied the town hall of Athens.

“Under redundancy” workers of the municipality of Athens have occupied the town hall of Athens in response to the sacking and destruction reserved for them in a few days by the miserable PASOK-ND coalition government, which once again hastened to send the riot police to confront their struggle!

Solidarity with the struggle of the “under surveillance” workers. Let us support the mobilization at Athens town hall. No redundancies.

Down with the junta of the government, the EU and the IMF.

In light of the upcoming European Parliament elections, it is worth taking a step back and asking ourselves: ‘What is the EU, what role has it played in the current crisis, what role does it play in general and whose interests does it serve’?

We believe that the EU has, from its foundation, been a reactionary project in the interest of capital. It was a response of the European economic élites to the claim for competitiveness against other major capitalist centres, a way of imposing deeper labour austerity and strengthening against the labour movement across the continent and finally a means to impose the political and economic grip of the core capitalist states such as Germany or France upon the weaker states of the European periphery, a process accelerated subsequently with the formation of the Eurozone.

The adjustment program imposed on Greece in the course of the last four years, leading to more than 1.5 million people to unemployment, the total abolishment of the concept of labour rights, the slashing of pensions and salaries by 40%-50%, the conversion of the whole country into a ‘Special Economic Zone’ of exploitation has without doubt revealed the true ‘nature’ of European integration. Let’s not forget that two out of the three members of the Troika mechanism, which together with the Greek governments have caused all this misery, represent core EU institutions, such as the European Commission and the European Central bank, lacking any democratic legitimacy what so ever.  Greece is no special case here. Similar ‘restructuring’ programs have been implemented under the supervision and guidance of Brussels to almost the entire European periphery, making increasingly evident how hostile European Treaties are to the actual interests of the people.

Moreover, the worst is yet to come, as according to its own announcements the EUs’ priorities are:

Having said that, it seems to us to be the case that the only solution in the interest of the European workers, unemployed and youth is therefore the fight against the eurozone and the EU as formations in the interest of capital. Not from a nationalistic point of view, but on the basis of a different, internationalist, framework for cooperation and solidarity between the peoples of Europe, in their own interest not in the interest of capital. It is in this context that we have organised this public event aiming to contribute to the relevant discussion, by examining the ‘nature’ of the European capitalist integration and the political strategies that the left and the labour movement must develop in order to respond.

Discussion-event ‘Crisis and the European Union’:

You can find information about the process of voting outside Greece pressing here.