← On 22nd March we continue the antifascist struggle!
Happening now: Solidarity with the struggle of the workers who occupied the town hall of Athens. →

Announcement of the occupied City Hall of Athens.

Today, the cleaners of the Ministry of Finance, the school security guards and the teachers of secondary education found themselves in the City Hall of Athens.

We are some of the workers whom the government, the EU and the IMF are throwing into unemployment . For us there is no tomorrow if we do not fight. And there is no victory unless we fight together .

Workers, the unemployed, the  redundant, and the five-month contractors and the vouchers of slavery. Today from the Athens City Hall we are shouting that we fight for all workers.

We declare that we will not leave from here, because what awaits us is poverty and destitution.

We urge civil servants to come down today to the Kotzia Square and from tomorrow to strike.

We call on the people of Athens to support us and fight with us.

To not fear them!

To rally to the Kotzia square and determined to give battle to overturn their policies.

To remember that we experienced our greatest victories in the streets and squares, in the collective fight, in the subversive and intractable struggles.

Terrorism shall not pass.

We fight so that our life is ours. 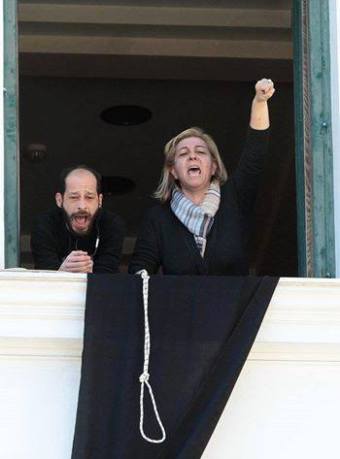